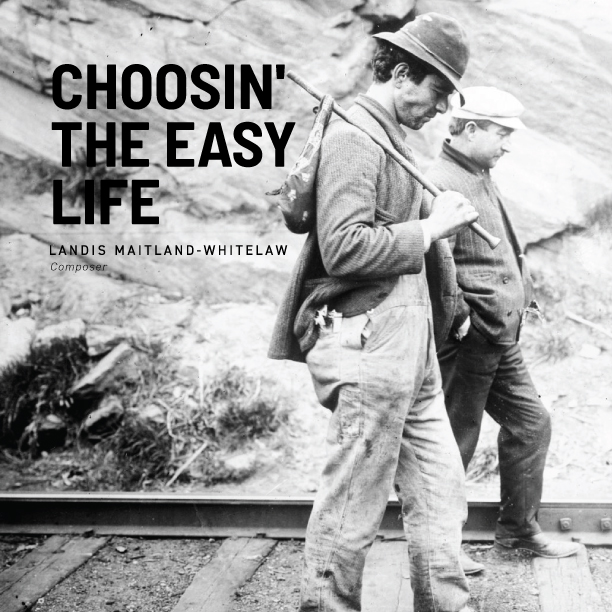 This is my first vocal release. It was originally penned on Sept. 28, 1995. It is all about choices. How choices have consequences and often long-term consequences.

“Look in the mirror this is what you get for choosin’, choosin’ the easy life.”

Over the years I have played this song in indoor and outdoor venues and even in church as its message is timeless and relevant.

During COVID, I put together musicians from my community to entertain the neighbours once a week and have continued to do this to this day. I played this song with this group of talented musicians and they loved it and expressed a desire to record it.

Recording of the Song

I produced, mixed and mastered the piece for its release. A great thank you goes out to the following people:

The song was produced and recorded at home in my Home Studio. I started by putting down a scratch track with a rhythm guitar and I sang the vocal part. I then laid down the rhythm guitar by itself using my Pura Landis Custom electric guitar and re-recorded my vocal on a separate track. Once that was done I created a drum track using Modo Drums by IK Multimedia. Ray then came in and laid the lead guitar track down and Sandy put the bass guitar down.

The next step was to lay down the backing vocals. You hear Ray, Sandy, Linda and Alice on these vocals. I then processed and blended them and bounced them together to save processing power. I then sent it out to friends for comments and was told the drums needed to be simplified and the rhythm guitar should be on an acoustic instead of an electric guitar.

Back to the studio

I made a fresh project using the already recorded vocal track. Ray and Sandy wanted to re-record their guitars for the final mix. Prior to Ray and Sandy redoing their parts I laid done a tambourine and once that was done I redid the drums from the kick, up. That made it easier to lay down the other live tracks. Ray then laid down his lead on his Fender Strat and Sandy used her Fender Jaguar Bass. I then re-recorded my rhythm guitar on my Pura OM acoustic. I played the opening run on this guitar and did the rhythm.

Aux Bus: Rhythm Guitar, Fender Vibroverb Amp, ROX gate, and the FAME plate reverb. The tambourine used the Abbey Road Chamber 2 mono Reverb. The vocals didn’t need any processing as they were already processed prior to coming into the final project. This mix was then volume balanced, panned and then bounced out of the project for mastering.

I used the Lurssen Mastering Console by IK Multimedia and used the Americana Loose preset. After several mastering sessions (returning for tweaks) the final mix was accomplished.

Now I am looking forward to mixing and mastering my & Tails album. The recording has all been done so now the work begins. Stay tuned.